Hi All, so it’s been awhile since I have posted on here, but I thought this might be a great place to keep track of our fundraiser that we held for the first time this year in honor of Erich. We wanted to raise $10 a day for 40 days and we did that plus some! Our goal was $400 by May 6th and as of today, 4/18 we are already at $430. So we thought, “Let’s keep this going and raise our goal to $550 and see how we do!”

This fundraiser is supporting the Brain Aneurysm Foundation and its efforts to support research and awareness of Brain Aneurysms. They do not have to be fatal. In Erich’s case, it was, and yet it wasn’t – He had such a special case – and without some of the new options for tools and techniques that came into existence between 2010 and 2016, he would have had zero chance to fight this. But he did fight it – hard – and almost beat it. Unfortunately, the disease won and we lost a wonderful person in the fight. We don’t want that to be the end of Erich’s story though. He was a bright, boisterous, loving person who could bring a room to life and change a person’s day with a hug and a hello. So we want to honor him and allow our fundraising efforts to support a legacy of hope and happiness in memory of Erich.

Erich fought to come back from surgery for 40 days in the Norfolk ICU and every doctor, nurse, and employee that came into contact with Erich during that time felt right away how hard he was fighting to get better. Whatever the reason, and however the end result played out, one thing was for sure to everyone who knew Erich before or during those 40 days: Erich McChesney did not give up. He went all the way to the end until there was nowhere else to go. In the end, it was a peaceful and content few days. Everyone felt the shift in his spirit as he was preparing for a different fight, the one where he had to prepare US to be without him. Even after his passing, he gave everyone the feeling of hope and peace and that he was still with us. He stayed near for quite some time until we were able to let him go. He kept nearby and came around often to many people over the months following his passing to ensure everyone was OK. That was what he did. Took care of his people. And when the time came, he moved on and left us with the memories of a loving and caring person who made so many things better in this world just because he was in it. Erich still cares and supports those he loved the most. I see it and sometimes feel it every now and then. While we may not be able to to be with him here, we can bring his memory and legacy to life through our actions and efforts to support others. We know he is proud to be the person leading and honoring this fundraiser and through him, we honor anyone who is fighting this disease and hope that research will continue to develop so that it gives everyone a fighting chance like it did for Erich! 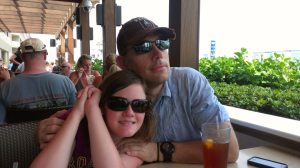 If you would like to help us hit our new goal of $550 here is a link to the fundraiser:

Love and Peace to all,